So we had fun today.

I got up this morning at about 9, quite a bit later than intended, wandered through to my office, gazed lazily out the window, wondered why the pool appeared to have a cover on it when we don’t have a cover, looked a little harder and OMG WHERE HAS ALL THE WATER GONE SOMEONE’S DRAINED THE POOL THIS IS A DISASTER!!!!1!

Now imagine my horror. My first thought, not being a very practical girl, was that one of the cracks in the pool (we think there is at least one) had somehow turned nasty in the night, and all the water had seeped away… to where? Under the pool? The neighbour’s back garden? Oh the horror.

So I woke Paul abruptly, and gave him the bad tidings. I think he thought I was exaggerating (as did my Twitter friends, it seems) when I said that the pool was EMPTY, but no, it really was. Empty as my coffee cup. Empty as Bafana Bafana’s trophy cabinet. Empty as Mother Hubbard’s cupboard. Empty as Bernie Madoff’s promises. Yes, empty. Got it? Right.

Anyhow, then it struck him that he’d inadvertently left the pump on backwash overnight. Our panic eased to a resigned sort of dismay. And then our dismay slowly turned to amusement. And then our amusement turned to OH WELL IT’S HAPPENED NOW WE MIGHT AS WELL MAKE THE MOST OF IT LOL.

So we proceeded to have a luvverly afternoon of: 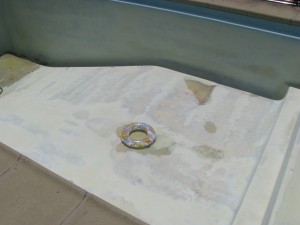 The pool is now half-full and we’ll be swimming tomorrow again. Yay!

Oh yes, that, and don’t leave your pool pump on backwash overnight.

2 thoughts on “Lemons and lemonade”