So we finally went to watch Iron Man at the Tyger Valley Ster-Kinekor on Saturday evening (late adopters, I know). I’d been assured by a few people that I would in fact enjoy it, despite my misgivings… and it turns out they were right.

The things I particularly liked about it included:

I recalled someone on Twitter mentioning that you should stay right until the end of the credits for an extra scene, so when the cinema emptied (clearly no-one else there was on Twitter), I nudged Paul and said, “No, we have to stay, someone on Twitter said there’s more.”

So we stayed. Through approximately three hours of credits. After about an hour and a half we started choosing names off the screen at random and saying them aloud, giggling every time we happened to pick the same one. This was mildly entertaining for about an hour. Then we watched the names of all the songs rolling on up the screen, and giggled about that too. Because songs are, you know, funny. Hey, after three hours of credits, anything’s funny.

Just when I was beginning to think I’d been led astray (Paul had harboured this suspicion for some time, it turns out), the credits ended and the Special Scene started playing. Then, after no more that 10 seconds, it stopped dead. I felt somewhat irked, as you can imagine. We’d sat through three hours of credits only to have the very thing we were DYING to see stop after the briefest of intervals! 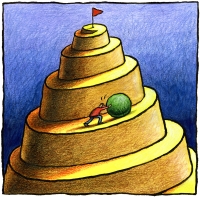 Paul dutifully went to find a manager to whom he could complain. He returned with tales of her contrition and her promise to make them play it for us again, just as soon as they could fix the tape. We sat around giggling for a while, until eventually the tape started playing again. FROM THE BEGINNING OF THE CREDITS. What was there to do but start the random-name-selection game all over again?

After a minute or two of that, we heard the cleaning ladies enter the cinema. Paul whispered to me, “They’re going to switch the lights on, aren’t they?” But they didn’t, thankfully. They just stood at the back chatting. After what seemed like another four hours plus two hours of song credits, the Special Scene started playing again. My excitement had reached fever-pitch by this stage, and I was on the edge of my seat waiting to hear what Samuel L. Jackson was actually going to say.

But it was not to be. At the precise point at which the tape had stopped the first time around, the sound cut out. Then the screen went blank. Then the picture flickered back for a few brief seconds, sans sound, and then it died. For good. (At this point the cleaning ladies got a bit rude with us, telling us in no uncertain terms that it was now high time for us to leave, because they wanted to clean. I don’t blame them entirely, since I’m sure they were as annoyed as we were, but still, no-one likes to be told off for something that’s not their fault.)

Since we were now late for a birthday party, we dashed out of the cinema, fortuitously encountering the manageress on the way out. We explained that the same thing had happened again. She shook her head sadly, and very kindly offered to try once more, but Paul pointed out that the next screening was starting in about 15 minutes, and there was no way we could fit in four hours of credits plus two hours of song credits in that short time. She promised us that if we’d like to sneak in to another screening at some point, so that we could see the end, we’d be more than welcome.

That’s great and all (and I know she was doing her best – what else could she have really offered us?), but I figure we have a better than average chance of sneaking in, sitting through the credits again, and then finding that the tape is still faulty.

You know what would actually make up for the inconvenience and disappointment? A special delivery of one Iron Man DVD, courtesy of Ster-Kinekor or whoever mangled that tape. That way, presumably I could watch the Special Scene as many times as I liked, without having to giggle through four hours of credits first. For now though, I’ll have to rely on the omniscience of YouTube, or beg Jonathan to tell me what Samuel L. Jackson said.